Learning to sew has long been a goal, but at the beginning of the year Brian and I began reading Overdressed: The Shockingly High Cost of Cheap Fashion and I got so riled up I finally took out the sewing machine that I've been scared of from its box. The book has been a fascinating (if a tough) read and it inspired a lot of further research that I hope to cover in Q2's resolution update.

The list of things I've made and/or messed with got pretty long pretty fast. The very first thing I made was a napkin out of the back of a black t-shirt we planned on donating from a Google swag drive: 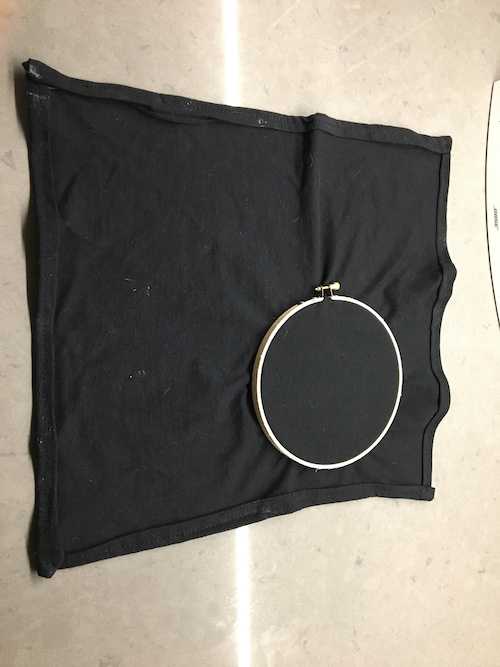 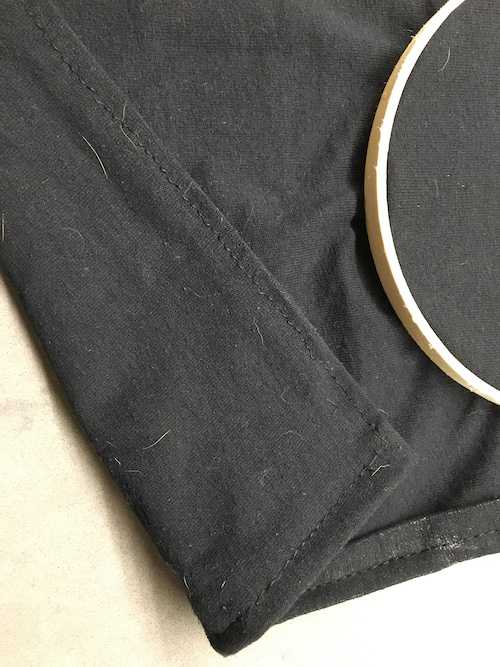 The wooden hoop is an embroidery hoop, since I planned to begin embroidering after I took these photos. The second is a close-up of the seam—not particularly elegant, and there is a stain you can see of where when I was ironing I accidentally ironed on some plastic from my sewing needles pouch. Wowza.

Since this was my first piece ever, it's not much to look at. I didn't know how to use my sewing machine yet, so I followed this tutorial on Youtube to set up my machine. (As far as tutorials go, I love this one, and am hoping to check out her following tutorial on skirt making at some point.) If I was to re-do this now I'd probably not choose a knit fabric because of how stretchy it was—it was harder to get straight lines. 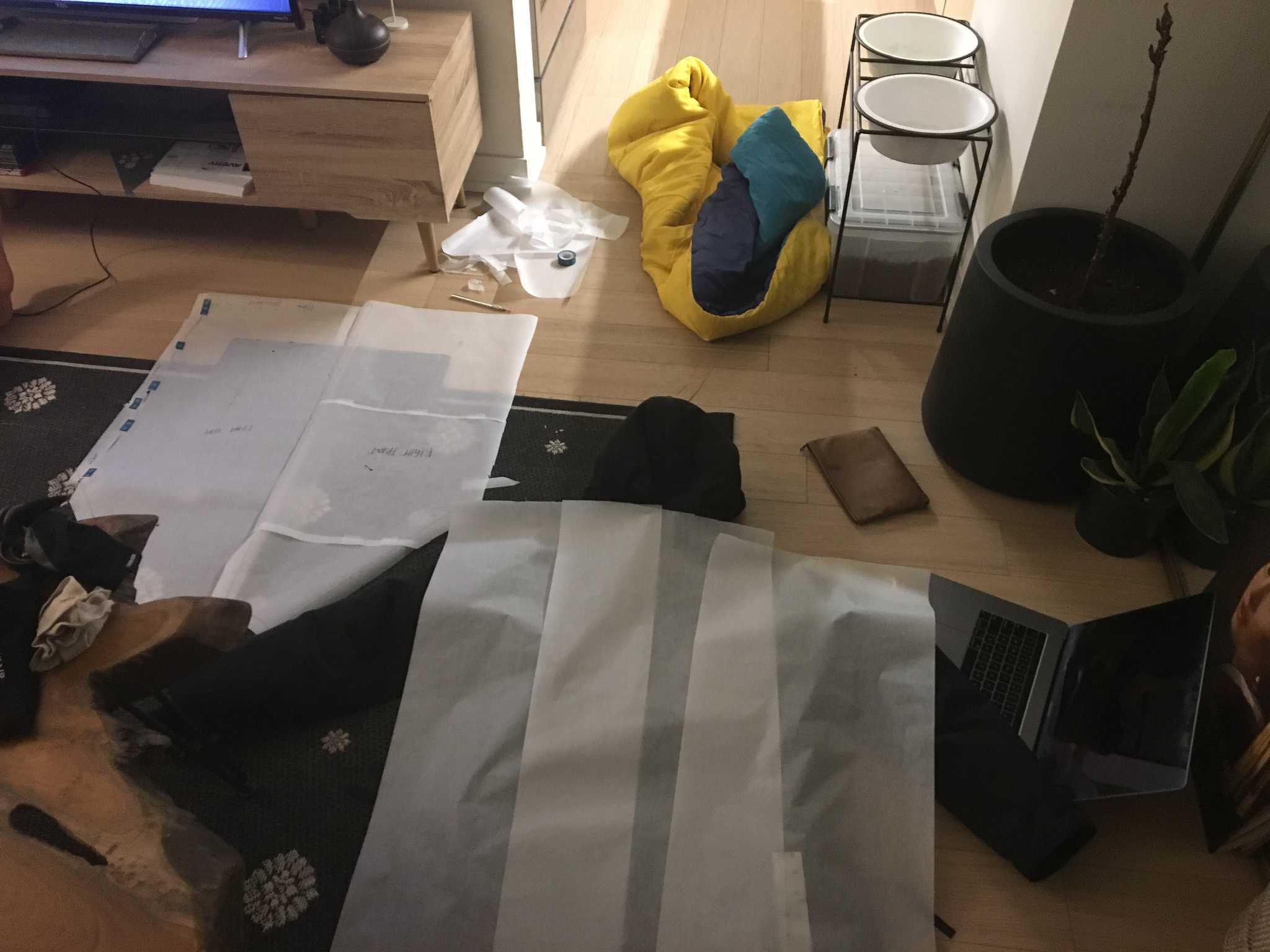 Some other things I've made or worked on: 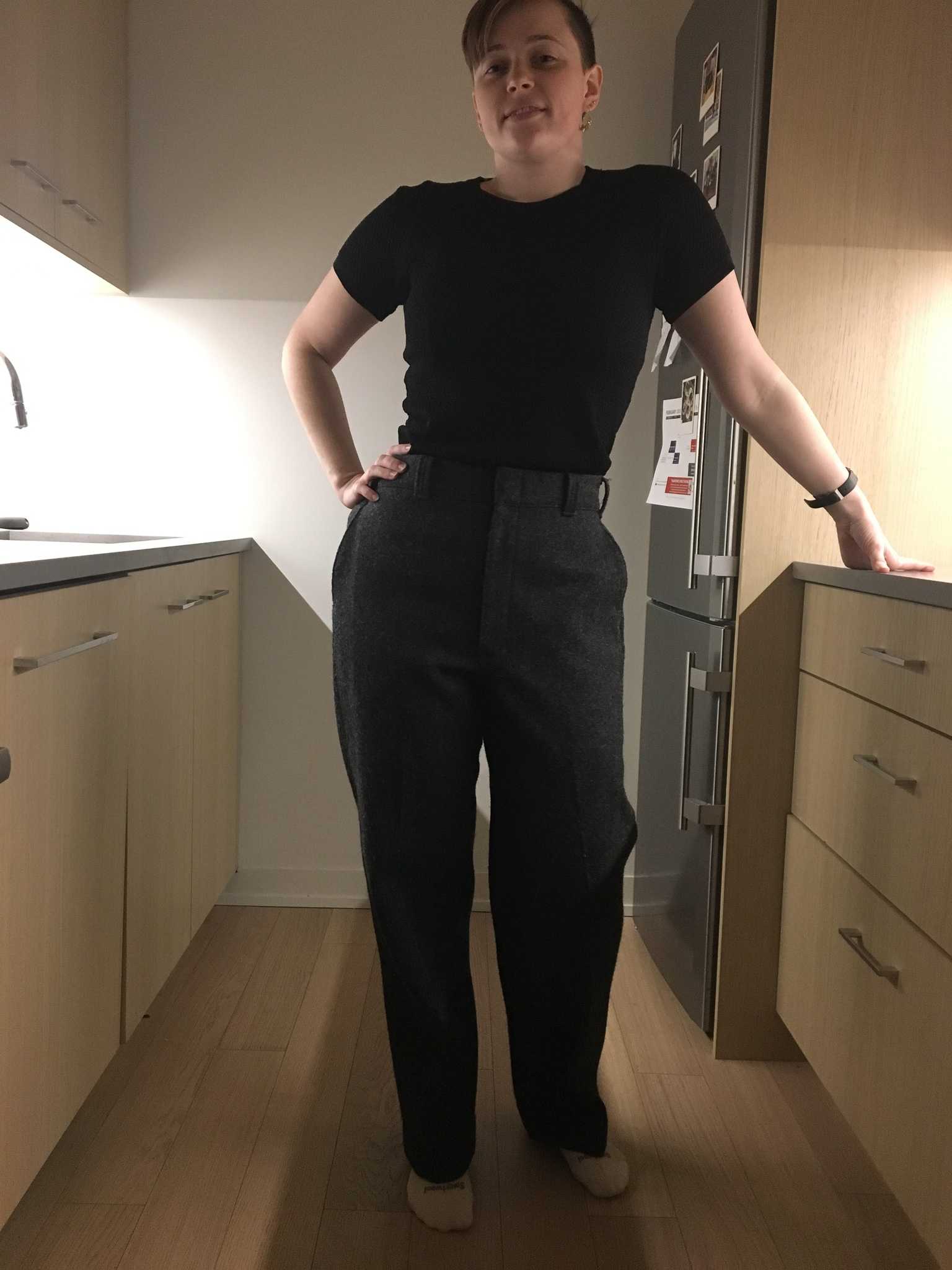 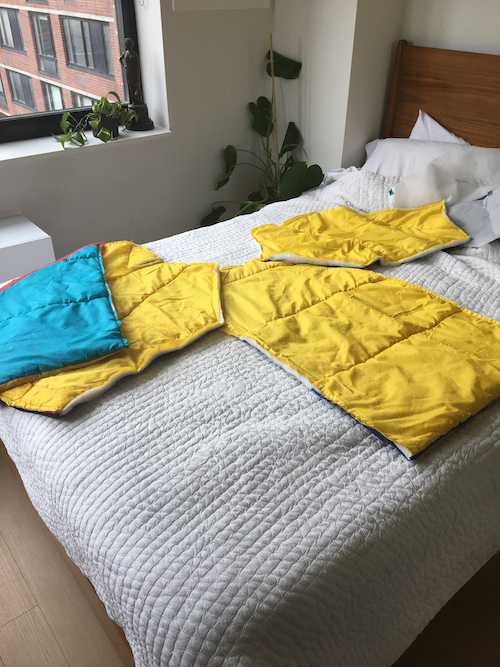 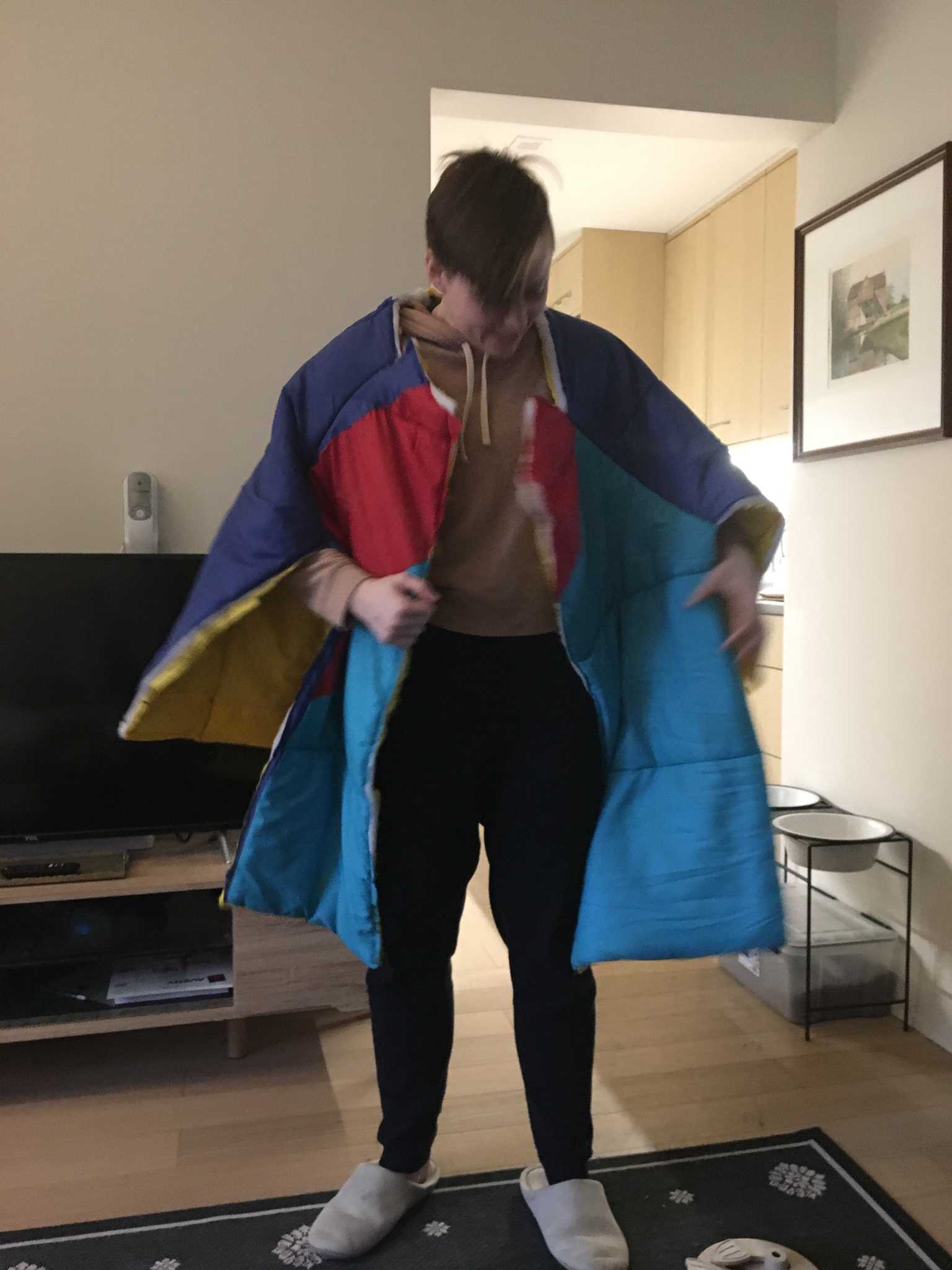 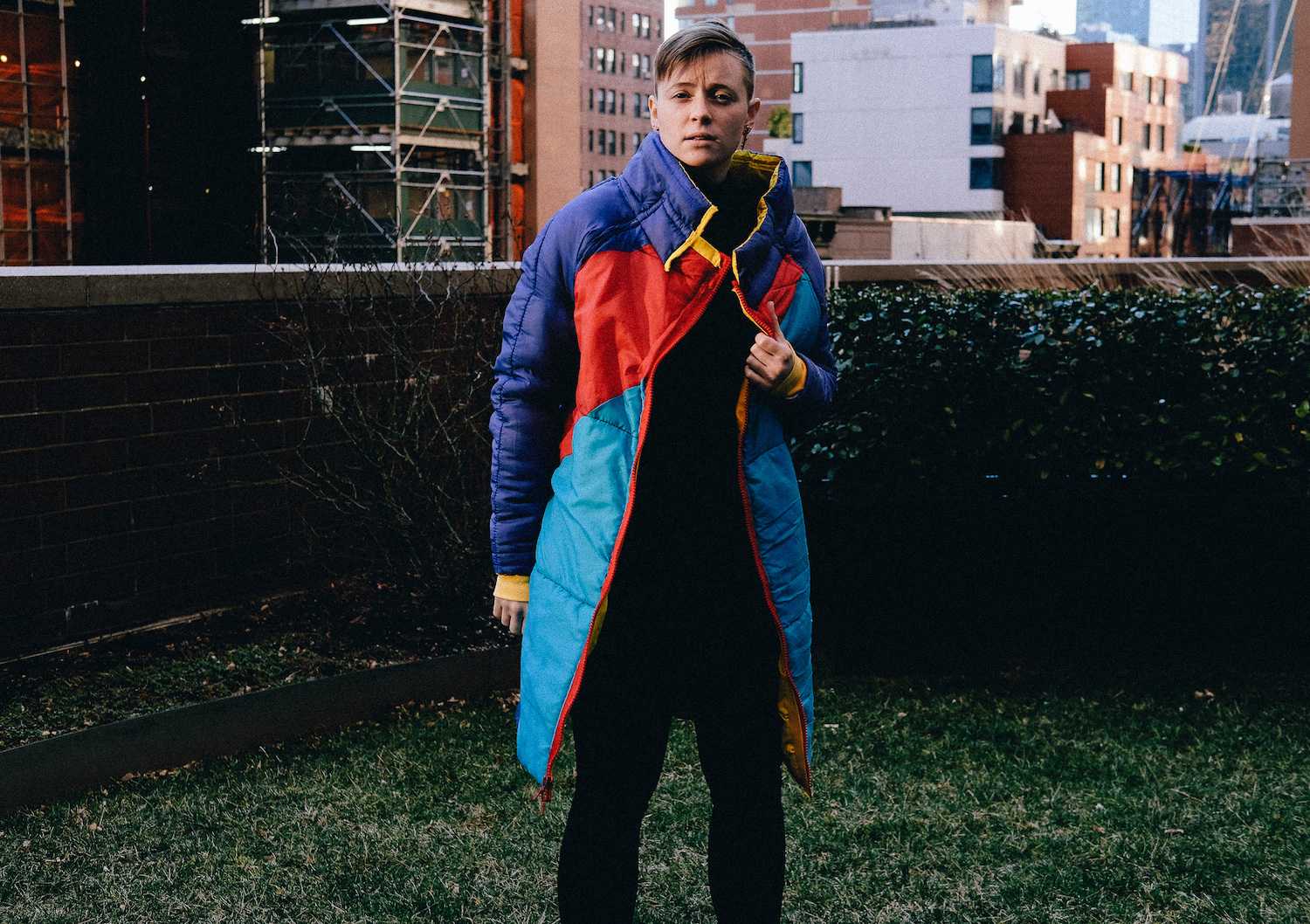 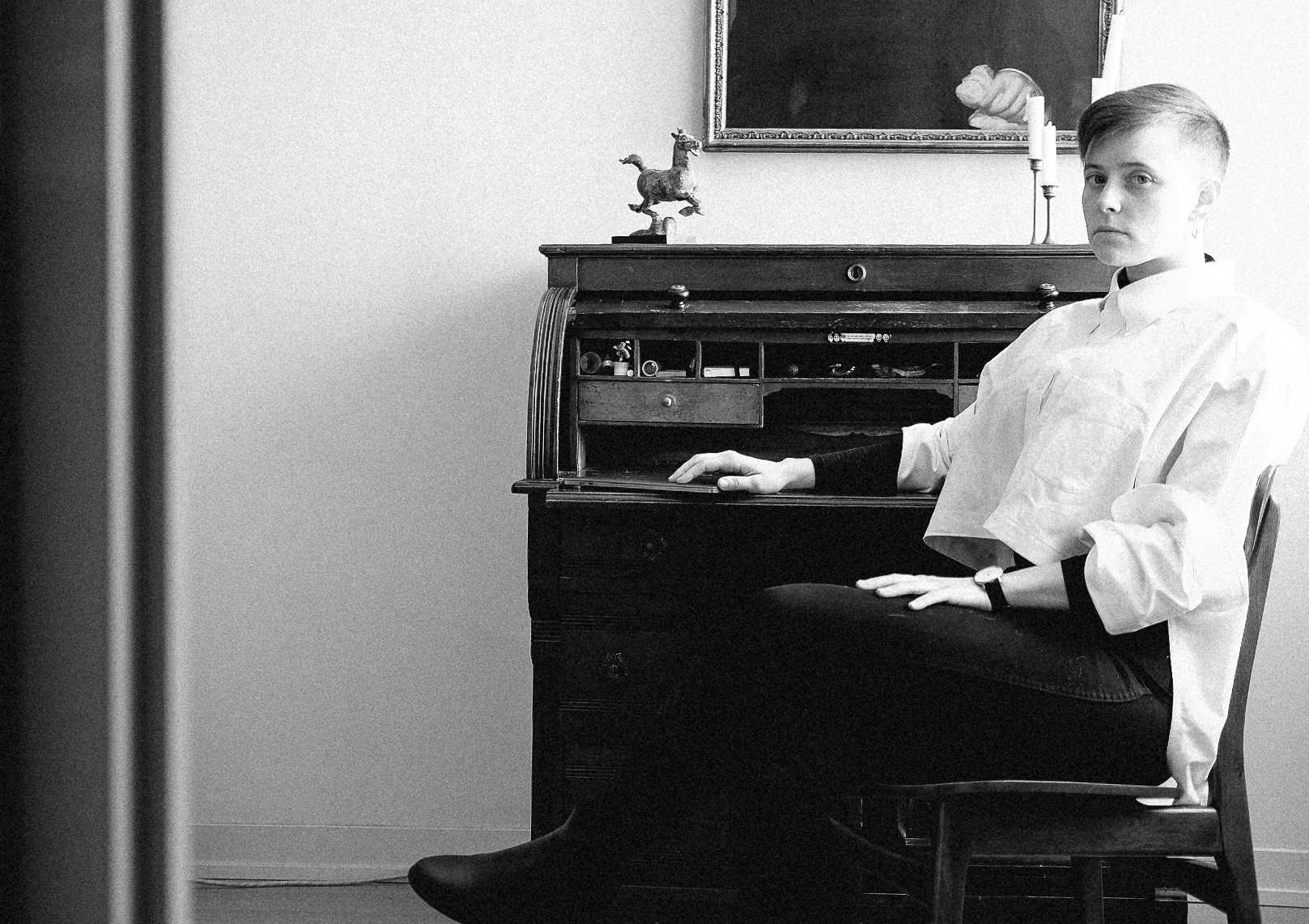 When I originally drafted this post (at this point, almost two months ago) I had some funny ideas about my own skills (notably with the puffer jacket project I was planning). That said I think my ideas were still fun if my own ability to execute was a mess, so I might add in some of those ideas into my winter jacket I own now:

The projects I'm planning to work on next:

Embroidering my handkerchiefs, each with a different permutation of the letter "H". Obviously one will be this site's logo. I have a few variations drawn of an Edwardian-esque script for the second, which leaves me with two designs to dream up. I'm excited for this since I think it will really make these feel like mine. I might fix the French seam on them first, but honestly the biggest reason I haven't gotten to this yet is that I use them all the time.

Creating a shirt from scratch, based on a shirt I like the fit of but hate the fabric of I got at a thrift store in the Bronx. Funnily enough I'm convinced that this shirt was someone else's home-sewing project because there are no labels whatsoever. Also, this person is definitely more talented than me. To the person who donated a matching shirt/skirt set to the Unique on 245th, thanks for the education. Also, sorry to ripping it apart to figure out what you did.

Recreating this belt as a present for a family member—since I've started sewing I've definitely been wondering if I can thoughtfully craft some gifts for family members for Christmas this year if I start early enough. I also have a candle-making kit I picked up last year and a bunch of essential oils friends have given me as gifts, so Christmas this year is probably gonna be weird coming from our household. I've been collecting glass jars and gathering label inspiration online—while I don't have easy access to nice printers in the city, I have time to figure it out and a graphic design degree, so I guess I should put that to use.

If this inspired you in any way, I'd love to hear about it at sayhi@helenvholmes.com. (Or if you have any cool patterns to share, I won't say no.)